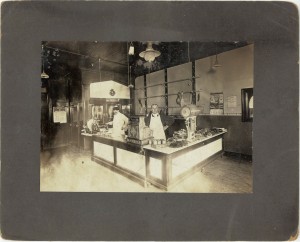 I (Polly) worked at our father’s butcher shop from the age of 8 years old, probably in 1927 or 28, both inside and outside running errands, and continued through high school. I worked there all day Saturday and was in charge of the financial issues during my high school years.

In the summer of 1937, I was accepted at Antioch College and gleefully showed the notification to Mother and Dad.  It required a financial statement and a signature confirming that financial obligations would be covered, which amounted to about $400 per year, at that time.  Dad’s unbelievable reply was, “What do you want to go to College for?  You’ll just get married.”  I tried to explain how important it was to me to further my education.  I had graduated Magna Cum Laude from high school, a member of the Honor Society.  I was determined to do something more with my life than marry a Jewish boy and become a “hausfrau”.  Here was an opportunity to broaden my horizons and meet a variety of people and have a number of job experiences (through the special Antioch college work-study program), which would allow me to earn some of the needed money.  Anyway, I felt that I had already earned part of the cost by working at the butcher shop all those years and I had spoken to Dad before about my expectations of going to college.  But Dad concluded the discussion by saying he couldn’t afford it!

I just blew apart!  I attacked him with my fists and pummeled as hard as I could, screaming that “It isn’t fair!  You know that I have been working for this for a long time.”  Mother stepped in and pulled me off, to stop the hitting.  I was beside myself!  I threw myself on the ground and just sobbed.  I was devastated.

When we all cooled off and could talk; probably the next day or so, Dad came up with a compromise.  I was to go to work for a year; put away some savings, and apply again the next year.  Meantime, Dad would also put money away for my college expenses.  I agreed.  I got a job as a stock clerk at Himmelhoch’s Department Store and enrolled in a required English class at Wayne State University night school.  My pay on the job was $14 a week which did not allow for much savings.  Actually, it paid off in the long run, because when I applied again at Antioch for the following year, they offered me a scholarship and gave me advanced academic and work-study credit for my year of work.

My older sister Bertha had a similar experience.  She graduated from high school and wanted to go to college, but Dad said he couldn’t afford it.  According to Bertha, Dad had contributed money to his brother Morris, so that Morris’s sons (Edward and Rudolf Politzer) could go to the University of Michigan.

It was clear, Dad thought that higher education was wasted on girls.

Summary
Article Name
The Butcher Shop & Advancing a woman's education
Description
In the summer of 1937, I was accepted at Antioch College and gleefully showed the notification to Mother and Dad. It required a financial statement and a signature confirming that financial obligations would be covered, which amounted to about $400 per year, at that time.
Author
Polly