On the way home, we noticed a bright light as we neared eight mile road.  By the time we reached our driveway, we already realized the glare was our house, engulfed in flames!  Dad dropped us off across the street and raced back to eight mile road where the Wayne county fire station was located.  He said that he plunked down a hundred dollar bill and asked them to come with their equipment and save our house.  He was told that he lived in Oakland County and would have to be serviced from Birmingham which was fifteen miles away.  They would make the call.  He returned, and we all watched the flames devour the inside of our brick house.

After what seemed to be a long time, we heard the sirens approaching from the north.  As the fire truck made the approach to our driveway, it got stuck too far away from the house for the hoses to reach.  The firemen piled out of the truck and began breaking the windows and smashing the glass front door – helping the flames burn even hotter.  We soon saw that their efforts were worse than hopeless and watched the two upper floors collapse into the basement.  I think I was sent to a neighbor’s to phone Aunt Regina to ask them to come and get us and to bring some blankets because Dad said he would not leave the premises and Mother was determined to stay with him.  The firemen poked around the exterior for a while and then had to tend to the problem of their truck and left the smoldering remains.  Aunt Regina and her husband took we three children to their house.

Dad was concerned about the safe which, undoubtedly, had fallen into the basement along with the contents of the house.  Somehow, Mother and Dad hunkered down somewhere where they could keep warm and also keep watch.  Dad’s premonitions proved to be correct; some time during the night they heard noises.  Dad had armed himself and before long several of the “firemen” appeared, presumably to loot.  Dad threatened them with his weapon and they took off.

With nothing but the clothes on our backs, Dad found a house for us to rent near the butcher shop and Maxine, Viola, and I could walk to school while our house on Southfield rd. was being rebuilt. 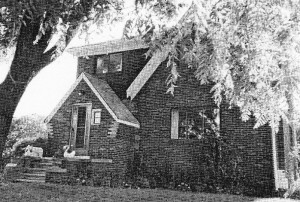 Summary
Article Name
The Fire
Description
After what seemed to be a long time, we heard the sirens approaching from the north. As the fire truck made the approach to our driveway, it got stuck too far away from the house for the hoses to reach.
Author
Polly