Gretchen and I wanted to get to know the young people in town, so we took the road around Chesley Lake and walked to the presbyterian church in Allenford on Sunday mornings.  The choir master greeted us very kindly and we were recruited for the church choir.  Eventually, however, the choir master discovered that I did not have a voice and asked me not to sing, but to mouth the words with no sound, so I could remain in the choir.  I did not mind as long as I could stay in the choir.

At first, when we got to Allenford, we were considered stuck-up city girls, but the young people soon learned to like us, and we liked them a lot, and we were allowed to join the group.  In Allenford, there was a big group of teenagers that did everything together as a group.  There wasn’t so much dating in those days.

We went to all the baseball games in Allenford.  This is one of the things everyone did together.  Aunt Gretchen and the two of us always wore the same dresses.  She wore a white polka dotted dress with a pink background.  Gretchen’s dress was blue with white polka dots and mine was violet with white polka dots.  They were our baseball dresses each with a sash to match.  I had made them all.

The baseball games in Allenford were very important because it looked like the team had a chance at winning the Canadian Farm Baseball Championship award.  And that was important to us, because Gretchen’s father had told the team that if they won, he would sponsor the Championship dance to celebrate their victory.  It was to be given in their big barn and he would pay for the band and everything.

By this time, Gretchen was dating both the Pitcher, Norman Wayne and the Catcher, Percival Noble, who when he grew up became a member of the Canadian Parliament.  I was dating, Garnett E. Montgomery, the Postmaster’s son.  He delivered mail, too, by horse and buggy in the afternoon and often invited me to join him for the ride and each time I went with him, he presented me with a bouquet of sweet peas.  They grew in his mother’s garden.

We wore the same dresses, which I had made, to the baseball games and the square dance socials.  And each girl had to bake a pie.  Gretchen baked mine and her’s.  They were always butterscotch pies with whipped cream topping and everyone knew that they were the best.  Then at the social the boys had to buy the pies and they would get the girl to eat it with them.  Usually there was a “box supper” that went with the pie.

You can imagine how excited Gretchen and I were when the boys won the Baseball Championship and we actually had the big dance in the big barn.  Gretchen and I helped Aunt Gretchen make all the food for the big occasion.  We made fried chicken, potato salad, vegetables and cakes.  That was the first time I ever made mayonnaise from scratch. 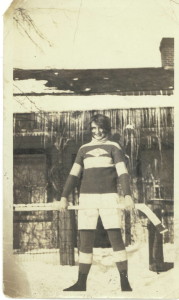 It got cold in October and November and the lake was frozen.  On Sunday we walked to town across the lake and we loved it.  Some days it was very cold, like 35F below zero, but we did it so we could get a ride home after church and sometimes we were invited for dinner by some of the girls and boys or we invited them home to our house.  It worked out very well.

And in the winter time we went with the gang to all the hockey games with the hockey team.  They used a big sled.  In Allenford in the 1920’s the only form of transportation in the winter was by sleigh.  We went in a big sled that had straw on the floor and had enough room in it for the hockey players and all the young people of Allenford; the cheering squad!  We always kept on the main roads since the side roads were pretty narrow and our sled was so big.  To make sure that we got to the games on time, the driver would sometimes pretend that we were a “funeral sleigh”.  He’d tell us all to be real quiet, and cut out the teenage ruckus and then he’d signal the other sleigh that we were a funeral sleigh and they’d let us go right through.  We were never late for a game!

Summary
Article Name
Socializing with the young people in Allenford in 1925
Description
At first, when we got to Allenford, we were considered stuck-up city girls, but the young people soon learned to like us, and we liked them a lot, and we were allowed to join the group. In Allenford, there was a big group of teenagers that did everything together as a group. There wasn't so much dating in those days.
Author
Fritzie