I can remember that everyday when we sisters came home from school there was a fresh round loaf of rye bread with jam for us to snack on.  I think my mother would get the rye bread fresh from the bakery every day.  One thing I remember very clearly, when I was 12, that on Saturdays we sisters spent the day cleaning at home while my mother and Aunt Gretchen went to matinees at the Bonstelle Playhouse or any other matinees playing in town.  They had a wonderful time together.  My mother loved to go and she dressed up like a Lady and really was a Lady going out.

Between Josephine and I, we got all the work done with the other girls helping.  My sister Bertha never wanted to do house work.  I can remember Josephine, who was the oldest, would get real mad at her.   Gretchen was usually deep in dance lessons, when all this was going on. 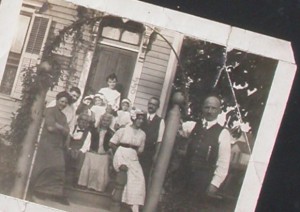 I don’t remember much about when we were young.  In general, we went to school, and did things together.  The two families would get together for picnics on a regular basis.  Either in our back yard or theirs.  Gretchen didn’t take part in the eating on these occasions in order to keep her ballet figure.  She watched her weight very closely even at an early age, because of her dancing.

It was Gretchen who chose me to go out to dinner with them early on. We were close friends, Gretchen and I.  She shared her feelings and dreams with me and I with her.  But it was different than now-a-days.  We didn’t have a lot of time to converse and share our secrets when we were growing up.  Gretchen was more the out going one and I tagged along.  Since she was a year younger than I, we didn’t go to the same classes in school and I don’t remember going back and forth to school with her.   She had lots of home work to do after school; piano lessons from her mother and ballet practice.  I eventually had three younger sisters to take care of after school and other duties.  I went to watch her in ballet class some times, but I just wanted to watch.  So we were both very busy with our own things growing up.

Gretchen was very preoccupied with her dancing.  She took ballet lessons.  And she was very good at it.  She went to Olga Fricker’s Ballet School and eventually, by the time we were teenagers, became one of the principle dancers and a soloist in the Concert Group of Miss Fricker’s Dancing school which was connected to the Bonstelle Playhouse in Detroit.  When I was twenty I got a job making costumes for Miss Fricker’s ballet company.  That’s when I took lessons there, too, so that I could understand more about how to make the costumes.

Gretchen’s mother used to make costumes for her.  The one that I remember particularly, that I had a picture of, was a butterfly costume with wings – a white satin butterfly.  During World War I, Aunt Gretchen sold liberty Bonds and to do this she would set up entertainment programs for people to watch.  She would plan the whole thing and she would have Gretchen perform solo dances in her butterfly costume. 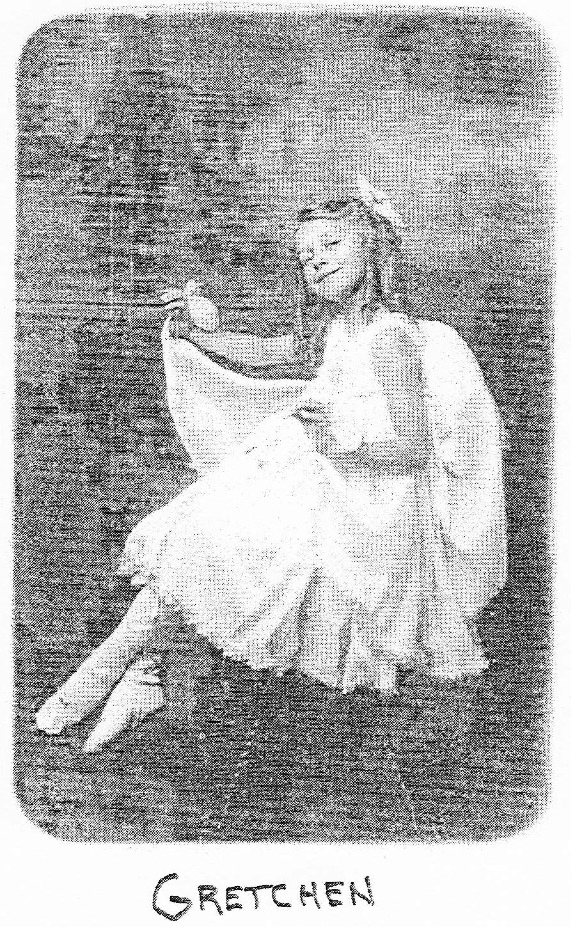 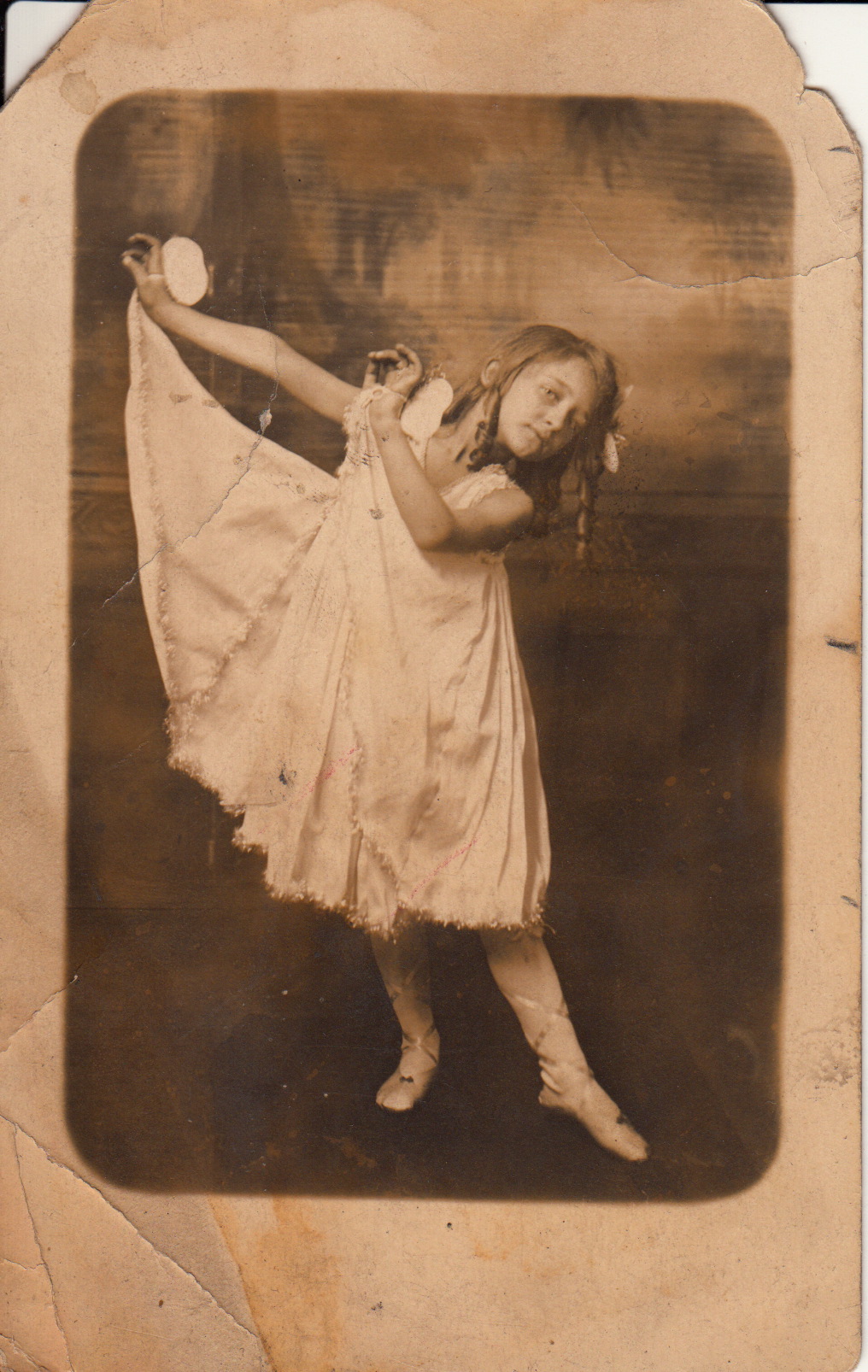 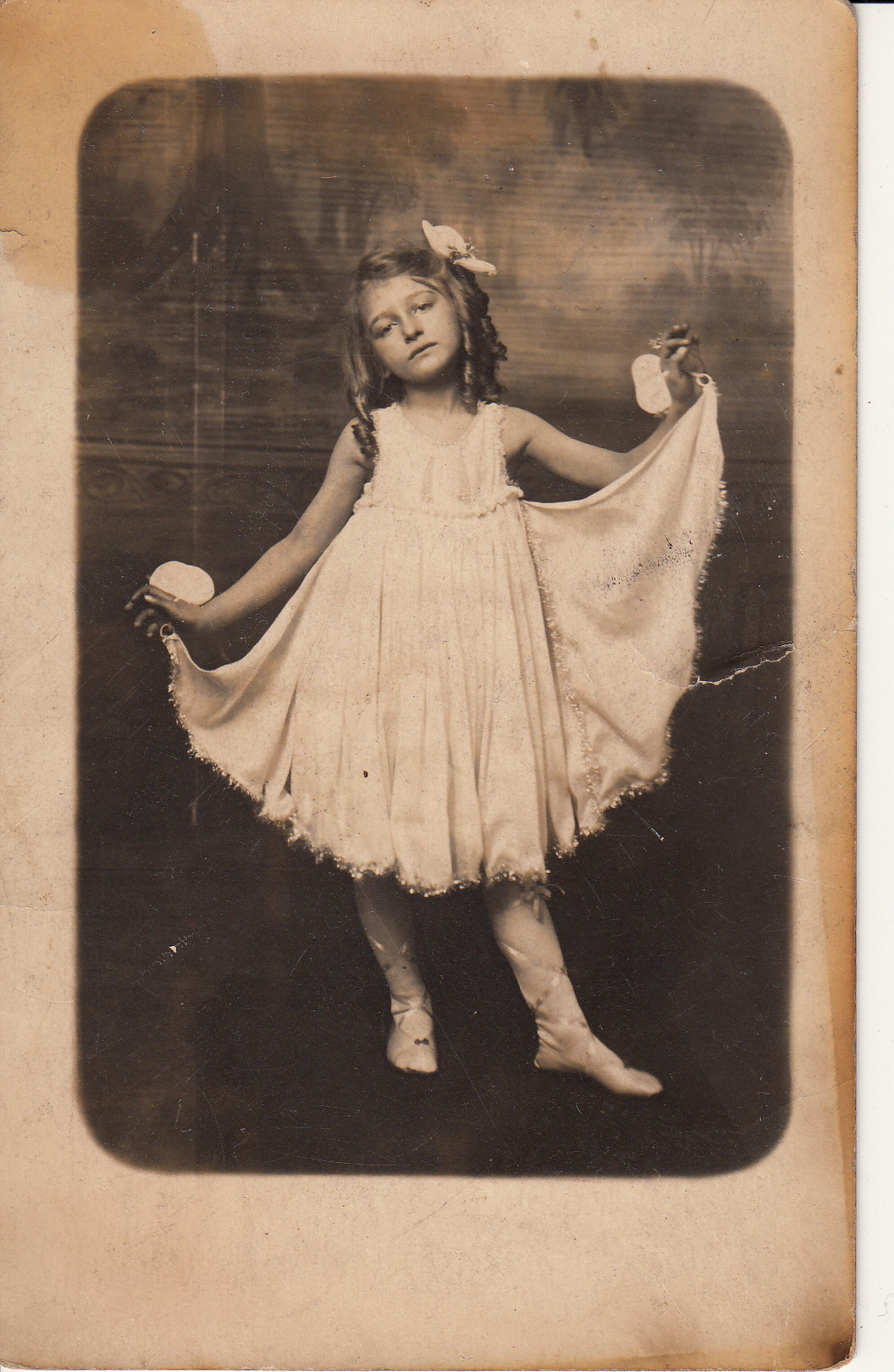 Eventually both families moved away from Gratiot Avenue.  The Haveman’s moved to the north side of town and we moved to Southfield Road in a house on 10 acres of land where wild strawberries grew in the woods.  I can remember on Sundays when maybe 25 of our relatives would come out to our house to pick wild strawberries in the woods and stay for dinner.  I can still see them now, maybe 20 aunts and cousins would sit in a row in the kitchen against the wall watching me washing the dishes singing “I’m forever blowing bubbles.  Pretty bubbles in the air……”  I was always washing the dishes.  My sister Josephine was always on a date.  My immediate younger sister Bertha was always studying and I was always washing the dishes or taking care of my three younger sisters.

I went to Northern High school.  At the time, we lived 5 1/2 miles from the nearest public bus stop.  So my father bought a car and gave each of us, who were old enough, a chance to learn to drive it.  Then he decided that I would be the regular driver.  So it was my job, every morning, to drive us to the bus stop and park the car there and catch the bus to school. 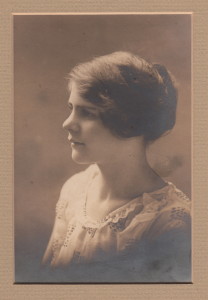 Summary
Article Name
Growing up
Description
Between Josephine and I, we got all the work done with the other girls helping. My sister Bertha never wanted to do house work. I can remember Josephine, who was the oldest, getting very mad at her.
Author
Fritzie