My mother was very much a loving, generous, caring person who was simply limited by her lack of education, but, strong in meeting human challenges.

My mother’s schooling stopped at the third grade.  She was deft with her hands, experienced in sewing, crocheting, and knitting, and loved gardening.  She was a husky, healthy woman who responded happily to Hungarian and Austrian music.  We had a victrola and player piano in our house, and she often couldn’t stop her feet from keeping time when the “Old Country” music was played.  She was also skilled in the art of making strudel.  She could stretch that fragile dough across our entire three leaf dining room table and create the flakiest strudel I have ever eaten.

Our “country place” was a magnet for the other relatives to arrive either late on Saturday night or early Sunday morning, to spend the weekend.  In the summer, the porch was used by relatives who would arrive with additional mattresses and sleeping gear on Saturday night, after they closed their shops, in order to spend Sunday in the country. 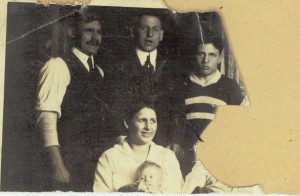 Probably Polly with her parents and other relatives.

The Aunts would busy themselves cooking and baking for the Sunday Dinner, while the husbands played cards.  We children played ball, climbed trees, went for walks in the woods, picked berries, and, occasionally, raided the trunk in the basement to create costumes, and put on skits to entertain the grownups.

Mother looked forward to these social times because she had no social life other than these.  She never learned to drive.  We had very few neighbors out in the country.  My mother always felt inadequate, but she always kept herself busy with household and family chores, did a little reading, and a lot of canning of the produce from her big garden. 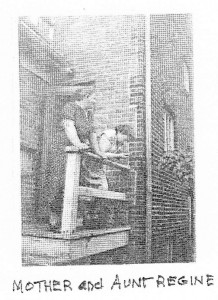 It was while I was in high school that Mother seemed to go into a deep depression: I would come home from school and she appeared to have done nothing all day.  The breakfast dishes would still be on the table.  I tried my best to clean the house and put things in order.  Some days I would find her weeping, but she would make no explanation.  Dad seemed as mystified as anyone.  Mother finally came out of it. 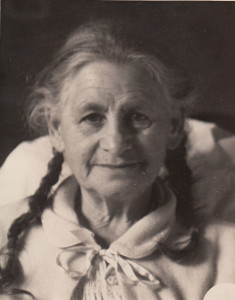 Summary
Article Name
Our Mother
Description
My mother was very much a loving, generous, caring person who was simply limited by her lack of education, but, strong in meeting human challenges. She was a husky, healthy woman who responded happily to Hungarian and Austrian music.
Author
Polly